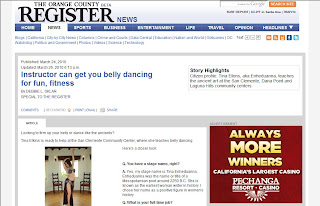 Just came across this interview the Orange County Register did with belly dance instructor Tina Enheduanna. If you haven't already seen it, you really should check it out because she's awesome.

Here's the link:
http://www.ocregister.com/news/dance-240914-belly-classes.html.
Posted by DeAnna Cameron at 3:56 PM No comments:

Tony and Angela International and Middle Eastern Night in Anaheim

(Click on image to enlarge)
Posted by DeAnna Cameron at 2:07 PM No comments:

In honor of Gothla's return... 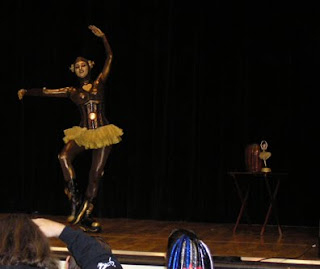 Last year, I attended Gothla US: The Divining and wrote this article, which was intended for Gothic Beauty magazine but which never quite made it there. A deadline was missed or computer Gremlins ate an email or something nefarious worked its dark mojo on it, I'm not sure what.

But, in honor of Gothla's return -- this year it is dubbed Gothla US: The Evoking and it will take place March 5-7 at Cal Poly Pomona -- I'm posting the article here as a sort of welcoming back.

Gothic belly dancers, Steam Punkers and a menagerie of their fans gathered March 6-8 in Pomona, California, for Gothla US: The Divining: Cogs in Motion to celebrate dark fusion at its finest and build on the event’s success as the first major Gothic Belly Dance festival to be held in Southern California. 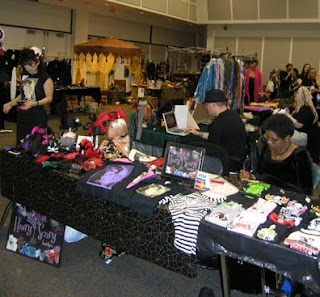 The festival, now in its second year, topped last year’s attendance, attracting locals and travelers from across the nation, as well as Mexico, Sweden and New Zealand.

It’s the event’s “uniqueness and the allure of the alternative side of belly dance” that draws so many participants,” says festival co-founder Sashi of Ascend Tribal Dance, a dance company based in Orange County.

That’s exactly what attracted Glenna McLendon, a Gothic belly dancer from Charlotte, North Carolina, who visited California with three friends for the sole purpose of attending the festival.

“We were Gothla Gluttons,” she says. “I went to almost every workshop. … There is nothing like [it] offered anywhere here on the East Coast.”

The first festival—held in 2008 and dubbed Gothla US: The Conjuring—was a collaboration between Sashi, Tempest and Ariellah, all internationally known performers, instructors and leading innovators of the Gothic Belly Dance movement. 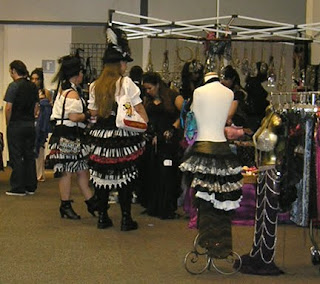 This year, Sashi and Tempest carried the festival forward, moving it from the Imperial Ballroom in Orange County to the student center of Cal Poly Pomona, in Los Angeles County. And what the new site might have lost in quirky downtown cool, it more than made up for with a professional-quality stage, a bigger floor to accommodate more vendors, and more comfortable space for workshops.

“Last year’s title was ‘The Conjuring,’ which is about bringing something into being, in magical/metaphysical terms,” says Tempest, who in addition to her dedication to Gothic Belly Dance is an artist, designer and writer commonly known by the sobriquet “The Gothmutha” and is featured in her own instructional Gothic Belly Dance DVD titled Bellydance for Beautiful Freaks. “This year was ‘The Divining,’ which is about consulting oracles and determining the future or the path of the art we love.”

The organizers also added the tagline “Cogs in Motion” to reflect this year’s Steam Punk theme.

“The Steam Punk theme of the event provided the attendees and vendors with a reference point from which to explore an aspect of the Gothic subculture,” says Sashi, who is featured in the Gothic Belly Dance DVD titled Dark Fusion Bellydance: The Ascend Tribal Dance Format and appears with Tempest on the Gothic Bellydance II: Revelations DVD.

“Personally, I see Steam Punk as an offshoot or direct kin of Goth,” says Tempest, who recently relocated from the Bay Area to New Jersey. “A lot of the old school Goths I know—including myself—have embraced the Steam Punk music and aesthetic as the next incarnation, especially those who started off as ‘Romantic’ or ‘Victorian’ Goths.”

She captured that vision in the artwork she created for this year’s event, in the image of the sword-wielding, tarot-card holding, clock-adorned dancer who graces the print and electronic promotional materials.

Many dancers who filled the full day of performances on Saturday, as well as the evening gala, incorporated Steam Punk into their acts, including The Elysium Dance Company, which brought the festival to a standstill with its “Peach Plum Pear” piece.

Set to a vintage music box tune, four dancers wove a story about a robotic girl who wants to become a real dancer and is helped by three Victorian ladies on her quest. The choreography not only demonstrated how theatrical Gothic Belly Dance can be, but how broadly it can be interpreted.

Taking such an expansive view of Gothic Belly Dance is something that comes naturally to Elysium Dance Company dancer Sina Muckenfuss, who has seen first hand how the Goth movement has evolved over the past decade. During the 1990s, she was immersed in the Goth subculture in Florida with all the vinyl and velvet gear, makeup and boots that entailed (“Talk about suffering for fashion!” the Los Angeles resident says now), along with the death rock that characterized most classic Goth music. She says she still harbors the same “dark aesthetic and morbid proclivities,” but prefers these days to incorporate her Goth background, as well as many other influences, into her dance.

Like many of the festival’s performers, Christina Shadburn of Palmdale, who dances as Desdemona, considers herself to be part of the Goth fold and appreciates that the festival showcases Gothic Belly Dance style in all its variations—not just Gothic tribal fusion, but also Gothic-style cabaret and Gothic-style folkloric belly dance.

“It embraces all forms of belly dance, with a unifying theme of ‘Goth,’ she says. “It’s the idea of adding a little more drama to your performance, setting a scene, telling a story, etc.”
The opportunity to explore that sense of drama and emotional intensity also appeals to dancers who enjoy Gothic Belly Dance even if they don’t fully immerse themselves in the Goth movement, such as Najma, a dancer who performed a duet—Naji Noire—with her dance partner, Taji.

“I’m not a Goth—I just like the music, the romance and the aesthetics of the subgenre,” Najma says. “This means that I have to do careful research when planning a performance, so that I can show respect for and understanding of the culture just as I do for Middle Eastern dance performances.”

To help participants who are new to the movement or interested in attaining a deeper understanding, the festival’s organizers included in the lineup of dance-related workshops a two-hour “Understanding the Gothic Scene” session for dancers and non-dancers, which covered various subcategories of the movement, such as romantic, industrial and death rock, as well as tips on creating an appropriate stage presence.

This year also saw the addition of Motif, an experimental gathering for Gothla US participants that blended music, dance and ritual. It was billed as a communal interaction, not a performance.

“Not only did we have two of the most knowledgeable trance facilitators in our midst, but also four remarkably talented and culturally significant musicians among us as well,” Sashi says. “The opportunity to walk away from Motif having experienced a transcendent spiritual, musical and physical experience was one of a kind and remarkably invaluable. You can count on Motif being a mainstay component at Gothla US for years to come.”

Something else Gothla US attendees can expect in the future is an extra day of shopping and onsite food concessions, she adds.

Next year’s event is tentatively scheduled for March 5-7 at the same location, Cal Poly Pomona.

To some great pictures and video taken at last year's event, check here.
Posted by DeAnna Cameron at 4:57 PM No comments: 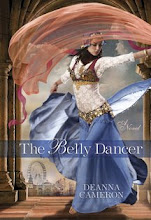